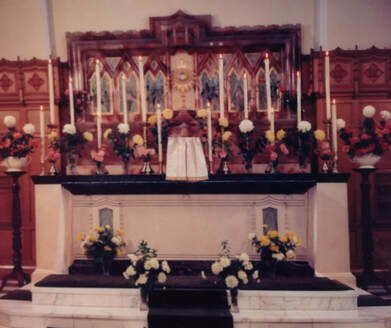 From 1859 the Admiralty provided an old hulk, formerly "HMS Hotspur", later renamed "Monmouth", which was moored in the Hamoaze as a Chapel to enable sailors and priests to observe Mass.  As the Dockyard expanded so the hulk was moved upstream towards Saltash.  It became a long way for the sailors to row so the Admiralty approached Bishop Vaughan.  The Lord Saint Levan offered land and the Admiralty gave £500 towards the building.  A Miss Ellis, who had come to Plymouth from Hayle for health reasons, gave £5,000.

Bishop Graham, Coadjutor Bishop of the Plymouth Diocese, laid the foundation stone in February 1901 and he also took the first service to be held there on the morning of Sunday July 6th 1902.

The Church was designed by the Reverend Canon A J C Scoles and was built of limestone, in the Gothic style, dressed with Bath stone. There were seats of pitch pine for some 550 people and an oak altar.  Mr R G Jenkin erected the building at a cost of £5,000.  A Presbytery was due to be ready in time for the formal opening of the Church in September 1902.  It was expected to cost £1,200. The priest was the Reverend Patrick Kent, the brother of the Reverend T P Kent, the priest at the Roman Catholic Church of Saint Michael and Saint Joseph at Devonport.

Our Most Holy Redeemer was reduced to a burnt out shell during the night raid of April 22nd-23rd 1941.  Exactly a week later the Presbytery met the same fate.  Two of the classrooms on the ground floor of the school were turned in to a temporary chapel.  It was rebuilt in 1954 and re-consecrated on Wednesday April 10th 1957.  During the ceremony of dedication, the Roman Catholic Bishop of Plymouth, the Right Reverend Cyril Restieaux, congratulated Monsignor Canon Gaynor, who had been the parish priest since 1924, on his development of the parish, part of which was transferred in 1935 to the Roman Catholic Church of Saint Paul at Saint Budeaux, and the erection of a secondary school at Keyham.

The Bishop consecrated both the outside and inside walls of the Church and the High Altar, while Monsignor E Dewey, a former Royal Naval Chaplain, consecrated the Altar of the Sacred Heart and the Abbot of Buckfast, the Right reverend Dom Placid Hooper, did likewise with the Altar of Our Lady.  In the evening they all attended a celebratory dinner at the Goodbody's Café in New George Street.